One Mayfair chalks up £25m bulk deal in Central London

An overseas investor has concluded one of the biggest bulk deals in Central London so far this year.

PrimeResi understands the Asian buyer, who is based in Singapore, has spent £25m acquiring a set of apartments at a new scheme in Zone 1, although further details are subject to strict NDAs.

The exchange marks the debut deal for One Mayfair, a JV between Mayfair Private Office and One Global, which announced its launch at the end of last year. The mystery purchaser is apparently looking to spend another £50m-£100m before the year is out.

The firm – billed as a “bespoke private wealth service” for HNW and UHNW individuals across Asia – is expecting interest from overseas to ramp up as travel restrictions ease, and says it is already working with a number of other investors with similar requirements, who are now keen to deploy their capital into the London market.

Cameron Smith, Director & Co-founder of Mayfair Private Office & One Mayfair: “Fantastic teamwork in getting this over the line from our team in Singapore and here in London. All parties are very pleased with this deal and it shows that even though travel is difficult, Asian buyers still have long term faith in London and when travel restrictions ease up, this will only increase. We are confident these buyers will want to spend another £50-£100m before the end of the year so we are already on the hunt for the next opportunity.”

James Puddle, MD & Founder of One Global & One Mayfair: “The whole One Mayfair team worked incredibly hard to get this deal over the line and its particularly exciting for me personally, as this is the first large multi unit transaction that has been concluded under our recently established partnership with Mayfair Private Office in London, and one of the first transactions of this scale in Central London to be concluded in 2021.

“The team has worked tirelessly throughout what has been a challenging past 12 months, particularly due to the travel restrictions. It is great to be able to see all of the hard work pay off and have concluded a transaction that all parties, including the purchasers and our developer client, are very happy with, and has clearly demonstrated that our buyers in Asia still very much see London and the wider UK as a place that they want to invest into.” 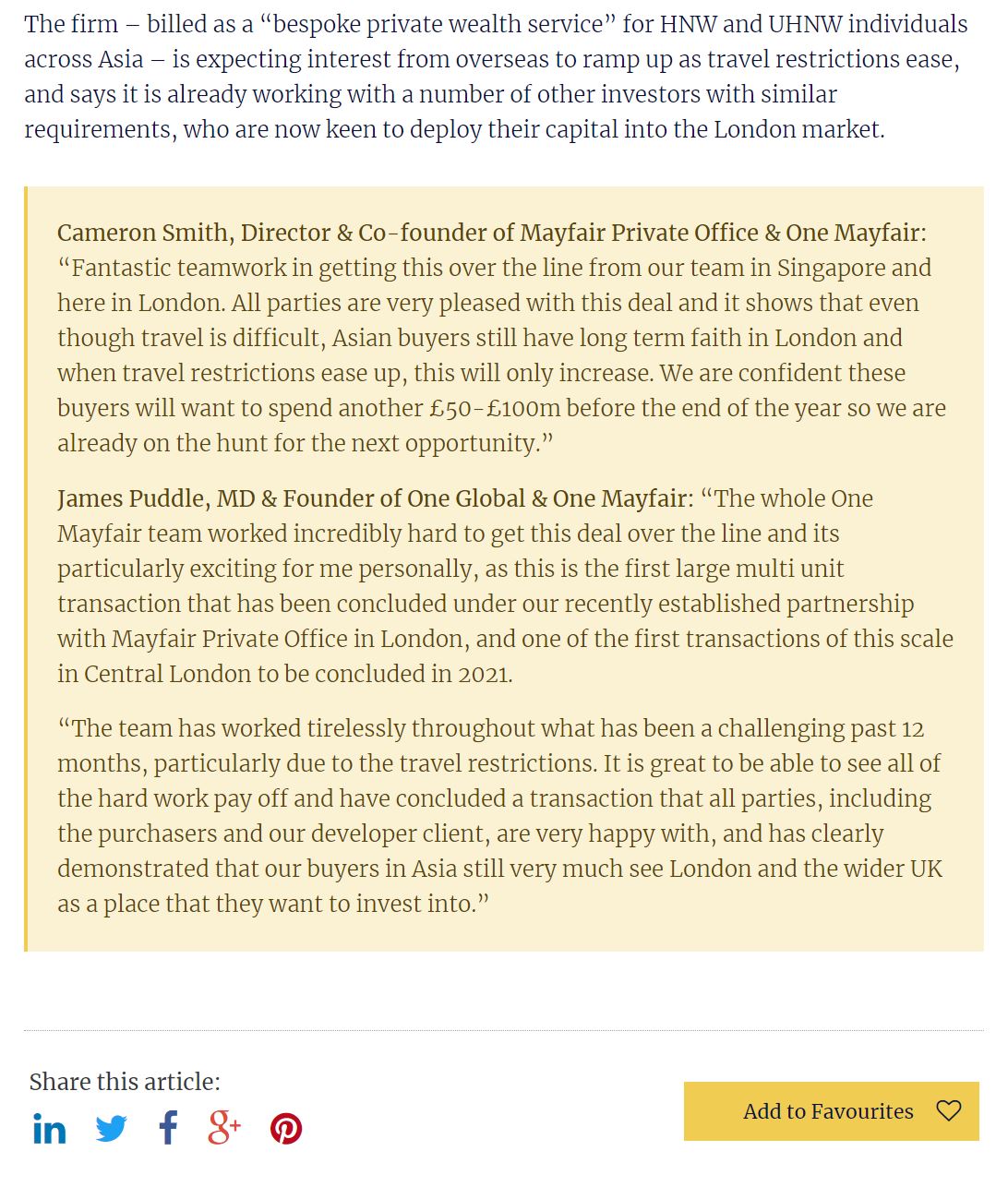