Super-prime buyers were out in force in the first six months of the year, splurging nearly US$14 billion on homes in New York, Los Angeles, Hong Kong, London, Sydney, Singapore and Dubai. Here’s a taster of what they were actually buying in the UK capital and other global hubs…

A particularly impressive family mansion on Ilchester Place ext to Holland Park, found a buyer, having been pitched for sale at £29.5m.

The 8,500 sq ft low-built house was “meticulously refurbished throughout” with seven bedrooms, a 34-foot formal reception room, double-height gym/studio, and a self-contained one-bedroom apartment (with its own separate entrance).

There’s also a double garage and a 64-foot south-facing garden, accessed via French doors from the kitchen/family room – all on one of the most sought-after (and expensive) residential streets in west London.

Described by agents as a “true trophy home”, this £22.5m stunner in The Little Boltons was being offered for sale for the first time in 25 years, and came with a swimming pool, private garden, off-street parking – and an interior by the celebrated French architect and decorator, Robert Couturier.

We hear the buyer was an overseas family, who saw off a number of other interested parties to acquire the property as a London base; the final purchase price remains undisclosed.

A Georgian townhouse on one of London’s best-known addresses was sold to to an overseas purchaser after sparking competitive interest.

Dating back to the 1780s, the Grade II* mid-terrace on Marylebone’s Portland Place was being offered on a guide of £14m and ended up going to best bids.

The near-9,500 square foot pile, which was being sold on the instructions of the fixed charge receivers, once served as a base for the Young Women’s Christian Association.

Planning consent was granted in 2018 to return the handsome affair back into its original guise as a single family dwelling, allowing for alterations including the demolition of a rear extension at ground level to create a new courtyard, and excavations under the pavement vaults.

Standing on the site of a former hotel, the double-fronted affair on Pembridge Villas was launched in 2018 as the biggest – and most expensively-priced – new-build to be delivered in the area for over a decade.

Originally pitched at £25m (£2,881 psf), the ambitious 8,700 square foot project garnered plenty of attention in the national press, but failed to find a taker. The property was relaunched last spring with a significantly reduced (-40%) asking of £15m.

After garnering a “huge amount of interest”, a deal was recently agreed with an overseas buyer. The final purchase price is undisclosed, but apparently the process ended up going to sealed bids.

Along with classically proportioned entertaining spaces and seven bedrooms, the property had been kitted out with a private spa featuring a 21 metre pool which transforms into a ballroom, decorated with a classical frieze based on Poussin’s Dance to the Music of Time. There’s also storage for three cars underneath the property, via the installation of the UK’s first Park Plus lift system, featuring robotic platforms controlled from a mobile phone.

A 7,085 square foot mansion on Carlyle Square, a highly-prized garden square just off the King’s Road, found a buyer after launching at the end of last year at £21m.

The freehold end-of-terrace was “comprehensively” rebuilt for the former owners, creating one of the area’s most impressive specimens. The all-new layout includes a 33-foot family/games room, a 42-foot open-plan kitchen/dining room, a formal drawing room, five bedrooms, gym, staff quarters, and an internal garage.

To the rear is now an award-winning garden, arranged with lower, middle and upper terraces, and planted up with living walls and mature trees.

A buyer picked up a £35m townhouse and mews combo on the north side of Belgravia’s Chester Square in one of H1’s largest deals.

Ceiling heights in the main reception rooms hit 3.5 metres, and bells and whistles include a five-person lift, air con to all rooms, and state-of-the-art security.

A 4,050 square foot lateral on Grosvenor Square was tucked away in speedy fashion after coming up for sale at £14.25m.

The six-bed, five-bath and three-reception residence, housed in a grand 18th century portered building on the square’s southern flank, went though without reaching the open market (and just in time for the overseas investor to beat the new stamp duty surcharge).

The former home of the fashion designer Tom Ford set a new price record on one of Chelsea’s best roads.

The double-fronted white stucco villa in the Boltons Conservation Area sold for £12.5m in a lightning-fast deal, marking the highest £psf rate achieved on Gilston Road to date.

Measuring 3,602 square feet, the property is tucked behind a high wall and has a set of high-ceilinged reception rooms on the ground floor, a west-facing garden, and three bedroom suites, along with a wine cellar, gym and steam room.

The interior was custom-designed by the American fashion mogul and filmmaker, who was creative director of both Gucci and YSL before launching his eponymous luxury brand in 2006. He also wrote and directed the Academy Award–nominated movies A Single Man and Nocturnal Animals.

A number of competing parties were in the running, and the eventual buyers – a European family – ended up exchanging contracts in just three days.

The price paid for the “significant” freehold on Farm Street remains undisclosed, but it’s said to be the biggest house deal in the area since 2019.

We first saw the 8,000-plus square foot new-build back in 2015, billed as “the UK’s most expensive farm-to-resi conversion” and being pitched at £25m.

The seven-storey, double-fronted affair has two reception rooms, four bedrooms, a kitchen, garage, study, and media room, along with a subterranean leisure suite with swimming pool and gym.

A buyer was found for one of Knightsbridge’s most significant penthouses.

Measuring nearly 5,500 square feet and billed as one of the few “genuine” penthouses in Prime Central London, the vast five-bed sprawls across the entire top two floors of Cheval House on Montpelier Walk and has a 1,600 square foot wraparound roof terrace.

The views, taking in iconic local landmarks including the Brompton Oratory and Harrods, are some of the best in the capital. The asking was £21m (£3,877 psf).

Described by agents as “one-of-a-kind”, the >12,000 square foot ten-bed was recently remodelled and kitted out with “some of the finest finishes available”, according to the original marketing materials.

The price paid makes it one of the largest resi deals recorded by the official ledger this year, although a mansion just along the road on Phillimore Gardens achieved nearly £29m a few months earlier.

In one of NYC’s biggest ever deals, a Taiwanese-Canadian tycoon reportedly splashed $157m on two apartments at 220 Central Park South.

The pair of full-floor units in the exclusive building went through in two separate transactions in May, one at $82.5m, and the other at $75m. The deal also included a studio apartment for staff.

A sprawling LA penthouse sold for $21.6m in June.

At one point the most expensive apartment for sale in the city, the 9,290 square foot “mansion in the sky” at the top of the Century building was originally listed at $35m in 2019.

Despite the 38% price drop, it was still the most expensive condo sale in LA since 2015, according to the MLS. Reports named the vendor as “Friends” star Matthew Perry. 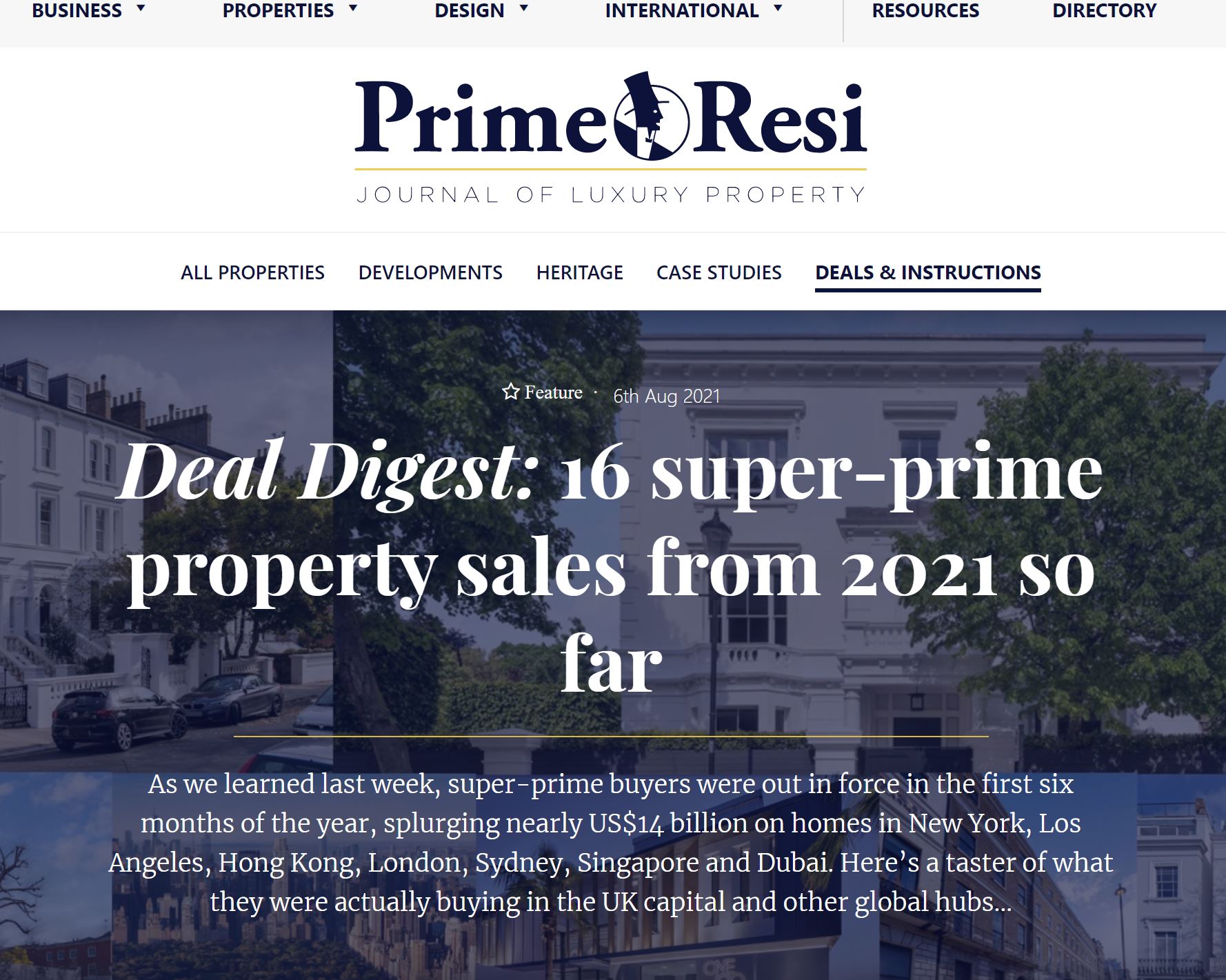 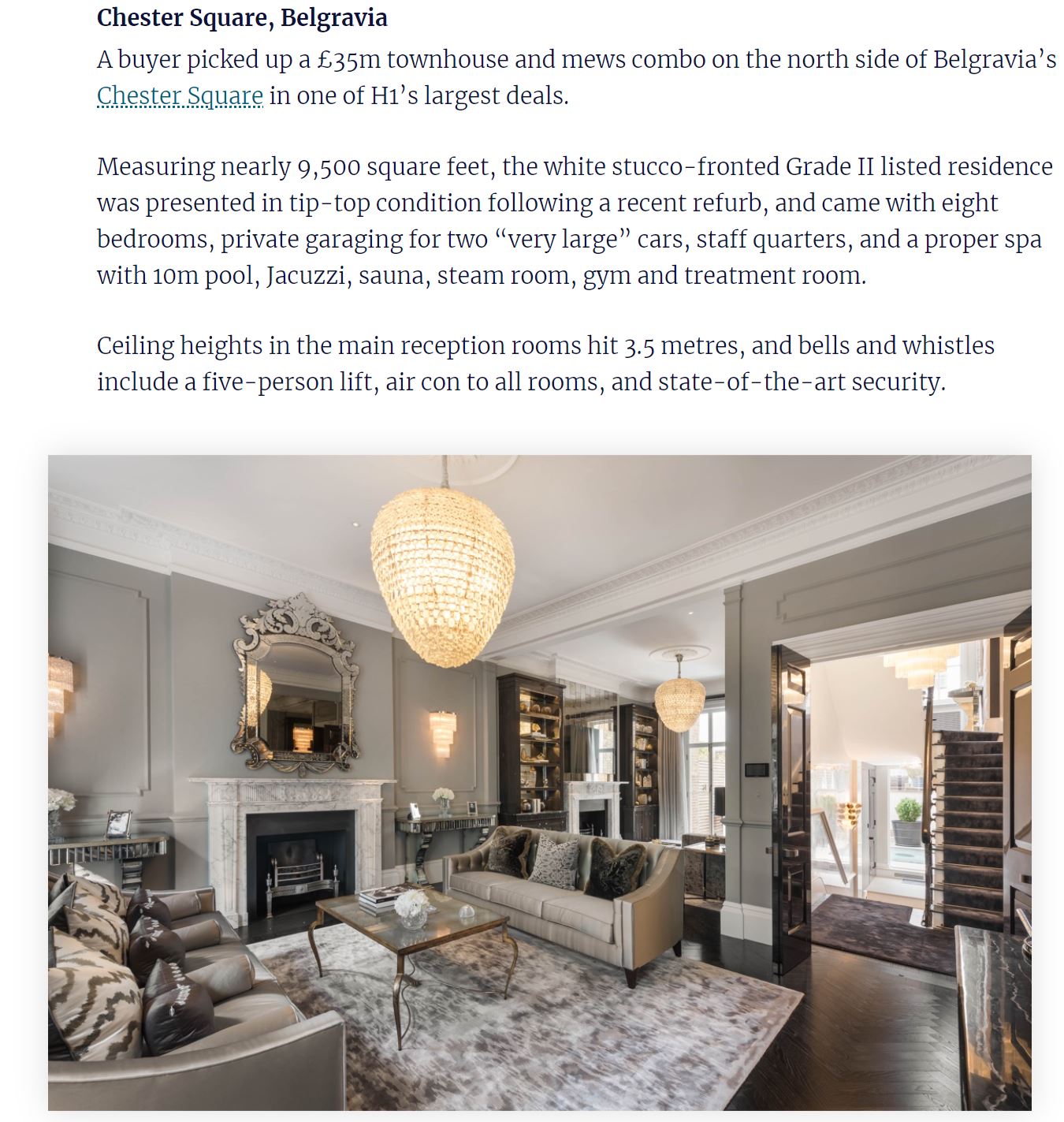